Martyn was born and bred in Cwmfelinach, South Wales. Faced with coal mining or construction as the only jobs available, he apprenticed himself to learn the art of Dry Stone Walling. Completing his City & Guilds in the early 80’sm he qualified in specialist brickwork, all aspects of stone masonry including cleaning and restoration, dry stone walling, and restoration of historical buildings. Examples of his restoration work and stone walling can be found to this day throughout the county of Caephilly.

He met the love of his life Rose in 1990 whilst on holiday in Malta, and got married soon after. The family set up their first home in Cwmfelinach, but after two years Martyn realised that the quality of life and work opportunities in Malta were much better than South Wales, so in 1992 he moved his new family back and set up his fledgling construction business.

Today Martyn has a large portfolio of successful completed private sector projects and works only through ‘word of mouth’ recommendation.

Commercial projects tendered for, won and completed, include works for EASO, Transport Malta, Mediterranean Conference Centre and the Malta Experience to name just a few.

In 2018 Martyn was invited to attend a specialist course held by ISOMAT the Greek multinational Group specialising in the development and manufacture of building chemicals, mortars and paints. He successfully completed the course and returned to Malta as a specialist in material application and maintenance of all ISOMAT waterproofing products and added Liquid Membrane to his portfolio of building skills.

Over the past 4-years Martyn has evolved to become the leading applicator and installer of liquid membrane in Malta & Gozo demonstrating his talent on a number of different types of projects ranging from; new roof sealing and existing roof repairs, swimming pool repairs / resurfacing, cesspit tank / bell well resurfacing & repair.

Never one to stand still, Martyn keeps himself completely up to date with all the new products relevant to his trade and their application methods, making him a goldmine of information appertaining to what the correct solution for your problem is. 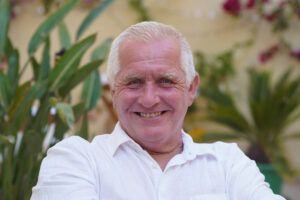 David is a founding Director of Viridis Navitas Capital Partners Ltd and a highly commercial, innovative and success driven individual. He is also an entrepreneur with a strong electronic, electro-mechanical, automotive and heavy engineering background.

Following 10 years of military service operating throughout the world, David spent the next 10 learning the commercial realities of international business by apprenticing himself to the most successful business owners and companies he could find. During this time he was tasked across a broad range of industries including, leisure, entertainment, automotive, telecoms, advertising and IT.

After successfully exiting TGNS in 2002 with annual revenues of $27m, David accepted the role of Commercial advisor to the then Maltese Minster of Finance, The Right Hon Mr John Dalli where he formed part of a 3-man team charged with redesigning the Countries FDI programme, agencies and Industrial Estate Management.

Successful completion of this project delivered a ‘step change’ in Government attitude toward FDI procurement, Business Promotion and even its own work force, pre the Country’s accession to Europe.

In 2004 David continued his career by taking on international consultancy roles within the restructuring IT and telecoms sector and later within the emerging renewable energy industry.

In mid-2009, David was invited to lead the design team in building an ‘algae to fuel’ Photo Bio Reactor for a US project. In mid-2010 working with the same US affiliates, he went on to manage the design and build of an innovative ‘oleophilic membrane’ crude oil recovery rig. With support from the US Department of Energy, the machine was deployed in the Gulf of Mexico and trialled as part of the Deep Water Horizon clean-up operation.

Since inception VN-CP has delivered 9 successful funding rounds for platform technology application spinouts raising in excess of £3M via HMRC Pre approved Seed Enterprise Investment Schemes & Enterprise Investment Schemes. The above-mentioned experiences have allowed David to build up a broad network of contacts throughout Governments and industries alike that he leverages to the benefit of any company he works with. Understanding the financial risk versus reward balance for investors, as a ‘real’ investor himself, he brings an unusual but extremely useful skill set to the company.

David manages the day-to-day operation, marketing, commercial due diligence, project creation, and IP portfolios for VN-CP, he is an equity participant in, and Commercial Director for, all VN spin-off SPV’s.

Be it participating in successful IT start-ups, or working within a ‘FTSE 500’ company, Mark brings more than 20 years successful operating experience at senior and executive sales management level to VN-CP.

Mark’s most recent corporate role was managing COLT Managed Services strategic markets region (6 countries and 27 employees). In his last year he delivered over £30m in revenues (118% against target) and nearly £13m of new business bookings (122% against target). This achievement was coupled with the process of transitioning the pre-sales technical architects, with corporate incentive structures to technical consultants holding personal incentive schemes.

Prior to this Mark held a number of senior Business Development roles including; Dimension Data for over 4 years, significantly exceeding revenue, bookings and margin targets in each of the 4 years he was there; GTS Carrier Services; and TGNS S.A.

Upon leaving the Royal Navy where he was a serving officer, he converted an antique shop into a pub and restaurant, operating it successfully for 2 years before exiting via a private sale.

Mark manages sales and operations for VN-CP and is also an equity participant in, and Director of, all VN spin-off SPV’s.

Jeremy is Honorary Professor of Nanotechnology, at Buckingham University UK.

Educated at the Universities of Cambridge and Princeton, and the Ecole Polytechnique Fédérale de Lausanne where he obtained his doctorate in the Institute of Chemical Physics for research on semiconductor nanoparticles.

He held the post of visiting scientist at the Eidgenössische Technische Hochschule (Laboratory of Chemical Engineering), Zürich (1993) and the Biocenter (Institute of Biophysics) of the Hungarian Academy of Sciences in Szeged (1987).

Jeremy is also a Fellow of the Institute of Materials, Minerals and Mining (London) and a IUPAC Fellow.

Jeremy manages scientific research, due diligence and university liaison for VN-Capital Partners. He is also the inventor of the Optical sensor technology, and Scientific Director of Nano Optical Equipment Sensor Solutions Ltd (NOSES) the owner and Licensor of the IP behind it.